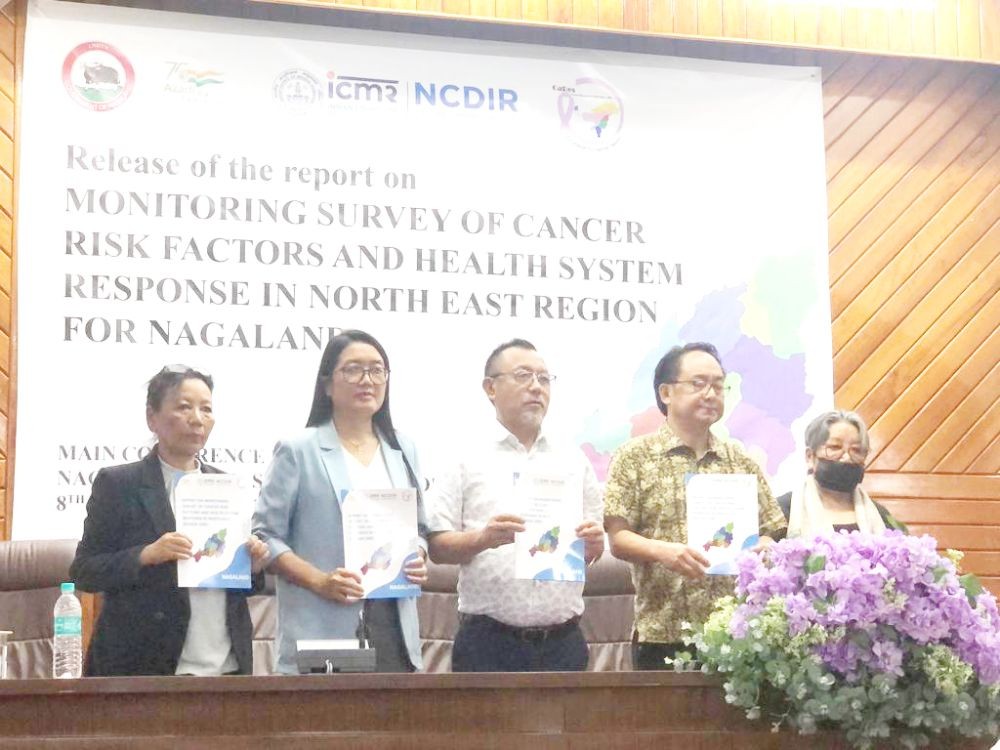 Dignitaries during the release of the monitoring survey report of cancer risk factors and health system response in North East Region for Nagaland in Kohima on August 8. (Morung Photo)

A glaring 25 percent of cancer patients in Nagaland never took treatment because of financial difficulties, according to the research findings of the ‘Monitoring survey of cancer risk factors and health system response in North East Region for Nagaland’ which was released on August 8 at the conference hall, Nagaland Civil Secretariat, Kohima.

The findings also indicate that 85.1 percent of cancer patient respondents consumed preserved/salt cured and fermented items while 81.2 percent in rural areas use solid fuel for cooking.

In his speech, Phom stated that survey findings will enhance the understanding and limitations in the fight against the burden of cancer which has long plagued the population in Nagaland.

“It is a call for a real, purposeful and transformative action that will improve the care and lives of patients and their families that has been traumatized by the burden of cancer,” said Phom.

Sharing a brief report on the study’s findings, Dr Vinotsole Khamo, Principal Investigator, Consultant and State Nodal Officer, BSL Lab Research and Ethics, DoHFW stated that the primary objective of the survey was to generate key cancer and other Non Communicable Diseases (NCD) related risk factors and estimate health system response in the State of Nagaland.

The secondary objective was to set a baseline to track trends in the prevalence of risk factors associated with cancer and NCDs, and to further link or correlate risk factors with cancer incidences and its burden for the State. The targeted population of the survey was 18 years and above under Kohima and Dimapur district in both rural and urban areas; and was conducted between November 2019 and March 2021.

Dr Khamo noted that 85.1 percent of respondents consumed preserved/salt cured and fermented items. 40 percent of the respondents had central obesity. Over one third of respondents (39.3%) were current tobacco users. Prevalence of raised blood pressure was reported to be 37.8 percent among men and 30.1 percent in females.

Dr Khamo also stated that in terms of health seeking behavior, 29.6 percent of respondents never had their blood pressure measured in life while 42.2 percent never measured their blood glucose level.

“We hope findings from this survey will enable policymakers and stakeholders in making best decisions to address cancer and NCDs prevention and control in the State,” concluded Dr. Khamo.

In his remarks, Dr Prashant Mathur, Director, National Centre for Disease Informatics and Research, Indian Council for Medical Research (ICMR) stated that the survey was carried out to understand the cancer burden which is very high in the North East Region including Nagaland where peculiar cancer cases which are uncommon in the rest of the country are prevalent.

With 50 percent of cancers being avoidable and preventable, Dr. Mathur stated, “We can reduce 50 percent of the sufferings of our people in Nagaland. To understand what is driving cancer, action lies here.”

Dr Mathur reminded that if actions are taken now by the State, it can avoid a decade of cancer sufferings. “Unless action is taken now, it will be a very expensive affair for any government to support,” warned Dr Mathur. In this regard, he suggested that the State needs make cancer a Notifiable Disease and to develop a cancer plan and implement strategy that will provide a holistic approach for cancer control.

The findings of the survey also showed that only 3.2 percent of the respondents were advised to quit tobacco use by Doctors and Health Workers, which Dr Mathur cited as an indication of poor counselling services in Nagaland.

Cancer Survivor, Neidonuo Angami, Padma Shree Awardee, Social Activist also shared a brief speech on her journey battling with cancer. Angami urged the government to focus on developing infrastructures for cancer treatment which is the immediate requirement in Nagaland. “How long will poor people continue to lose their lives just because they did not have the opportunity to avail treatment?” questioned Angami.

The opening remark was delivered by Asangla Imti, Secretary, Government of Nagaland, Health & Family Welfare while the vote of thanks was presented by Dr Vikato Kinimi, Principal Director, DoHFW.

•    The proportion of solid fuel use was high in rural areas (81.2%)
•    Over one third of the respondent (39.3%) were current tobacco users, comprising 57.1% men and 19.8% women.
•    18. 8% of respondents reported to have consumed alcohol over the past 12 months
•    The mean number of days on which fruits or vegetables were consumer was 5.8 days in a week.
•    According to WHO criteria, the proportion of those who were obese was 6.8% while the prevalence of obesity was higher (35.5%)
•    The prevalence of raised blood pressure was 34.1% of which the proportion of newly detected 29.3% was higher than previously known (4.8%)
•    Only 50 % of District Hospitals had daycare facilities for chemotherapy
•    28.6% of General Duty Medical Officers at CHCs and District Hospitals had been trained for NPCDCS/NHM/State Program.
•    Cancer screening for all three types of cancers (cervical, breast, oral) was available only in 50% of district hospitals. From Obesity to Tooth Decay, How These 4 Beverages Harm The Children – News18

Asthma: 9 Superfoods For Asthma Patients To Consume In Monsoon – NDTV