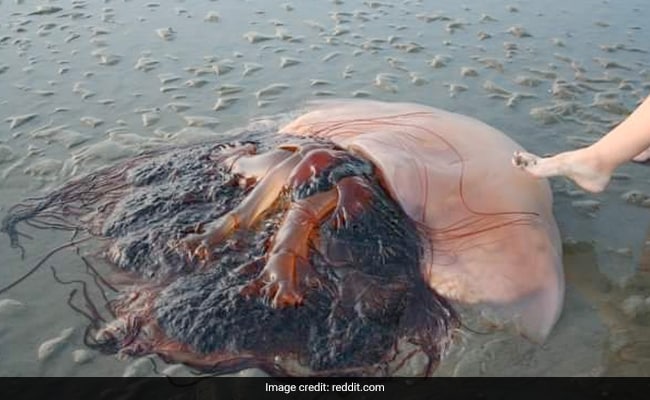 A stunning picture of a giant jellyfish is gaining traction on social media. Shared by a user named Alesig on Reddit two days ago, the picture of the jellyfish is shown next to a woman’s foot for size comparison.

The dead jellyfish can be seen lying on the sand on a beach in South Korea. Its appearance is described by Newsweek as “a brain with Jell-O tentacles” and has a dark pink-brown colour.

While sharing the post, the user wrote, “why I also did not swim in South Korea (mother’s foot for scale).”

The photograph was captured back in 2008 on a beach in Incheon with the user saying he hasn’t seen anything that large before or after. “It was around 1-1.5m [3.2-4.9ft] wide. It’s difficult to say. It was lifeless and a little squished “Alesig told Newsweek. “I have never seen anything like it since.”

“This is the second time I’ve seen a picture of a woman’s foot on a giant jellyfish,” wrote a user.

Others users said that the creature may be a Nomura’s Jellyfish.

Gill Mapstone, a jellyfish expert and Scientific Associate at London’s Natural History Museum, told the outlet that, “The giant Nemopilema nomurai is a rhizostome jelly, and as such does not have any marginal tentacles around the bell. This, together with the fact that it was imaged in South Korea, does make it seem the most likely species.”

Nomura’s jellyfish is nearly as huge as the world’s largest, the lion’s mane jellyfish, reported Newsweek.

These colossal creatures are often found in the East China Sea and the Yellow Sea. Their lengthy tentacles carry venom, which can cause itching, swelling, extreme discomfort, and even death in certain circumstances.