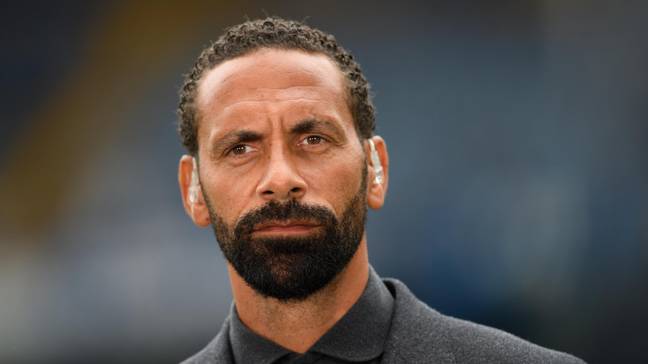 Erik ten Hag was spotted greeting Rio Ferdinand before winning against Southampton on Saturday and the former Manchester United defender has revealed what was said.

The new manager at Old Trafford has turned the momentum around at the club following a poor start to the Premier League season.

Back-to-back victories against Liverpool and The Saints has given fans some much-needed optimism following prior defeats to Brighton and Brentford.

Whilst Ten Hag has been making strides with his team on the pitch, he’s also developing himself off it too.

His approach to the media has been well received by United fans. He recently banned a Sky Sports presenter from asking a question in a press conference after he mocked the manager in a tweet.

With the ruthlessness – similar to that of Sir Alex Ferguson – comes a more calm, yet assertive approach from the Dutchman.

His first encounter with United correspondents came during pre-season and he made sure to shake their hands before questions got underway.

He’s also made some jokes when speaking to journalists. He’s got a great approach in this space. Not too soft, not too hard.

Alongside the traditional journos comes pundits, who are often ex-players. Ten Hag made sure to meet two United legends when at Saint Mary’s on the weekend.

The United account caught the manager walking up to Rio Ferdinand and Paul Scholes before the game, who were on punditry duty with BT Sports, and give them a handshake and a hello.

In his latest YouTube video, Ferdinand was asked what the new boss said to him in that encounter.

The former Red explained that whilst it was a short conversation, he can tell that Ten Hag acknowledges the media influence.

“He came over, he said hello. Listen, the media is such a big thing in the game,” Ferdinand explained on Vibe with Five.

“He knows that we’re there and we have a big voice and a big platform to speak, obviously with Vibe with Five and being on BT,

“He came over and said hello, hope you’re well, et cetera. It was nothing too deep to be fair,” Rio explained. “I just said listen, I just wished him good luck, man. I want him to do well,

“Every Man United manager that comes in, I’m a fan, I want him to do well, so I wish him the best.”

United’s energy of late is to the surprise of some, but not all. It is known that Ten Hag made his players run over 13 kilometres on the following day to their 4-0 loss to Brentford. He joined in with the exercise, showing solidarity which impressed United players.

Ferdinand detailed this aspect of the Dutchman, as he witnessed pitch side on the South coast.

“He looks like a really focused and intense guy. I’ve seen him standing there watching the guys warm up,” he said.

“He’s a man of detail, but also he seems like (he brings) disciplinary. He there to make sure people are doing things right.”