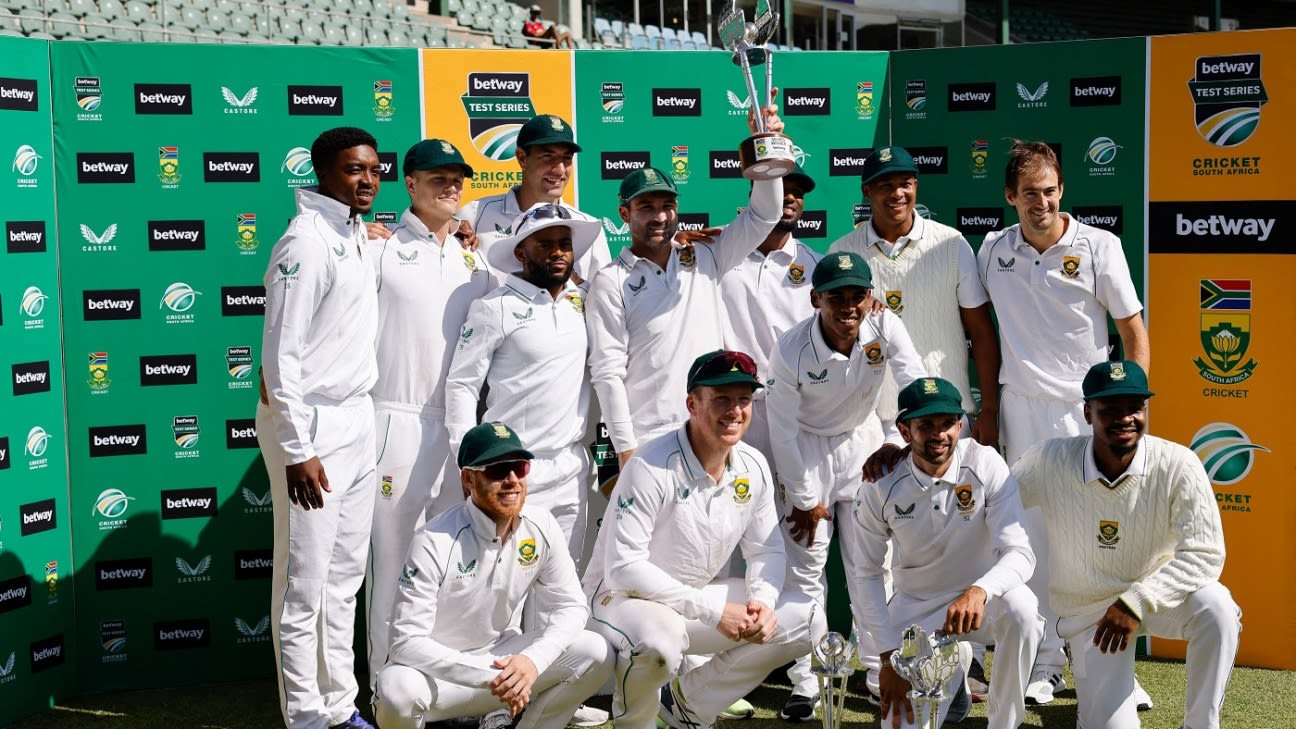 Keshav Maharaj roared in delight as he tumbled onto a Lord’s outfield that looks more lush than any of the grass in London’s thirsty parks, with the ball safely in his left hand. “Yeaaaah,” he screamed, taking the fielding session that ended Sunday’s training as seriously as though it was match day. Maharaj has that sort of intensity about the way he does things and he expects it from others too.
The ball before, Lungi Ngidi chased a ball that was clearly heading into the Lower Tavern stands and attempted a leaping catch. As Maharaj told him to leave it, Ngidi crashed into the boundary boards. “You would have had your head over there and your body over there,” Maharaj yelled, gesturing in opposite directions. The last thing South Africa want is for another fast bowler to get injured.
Happily, their main concern, Kagiso Rabada bowled, batted and fielded in Sunday’s training and is progressing well in his rehabilitation from an ankle ligament concern. There’s still no confirmation on whether he will be fit for the first Test, which starts on Wednesday, but as things stand, his recovery is on track.
Unhappily, Duanne Olivier, who has experience in English conditions as the only quick bowler other than Rabada to have played in the 2017 series and from his time as a Kolpak player, has had the opposite luck. He was ruled out of the tour after tearing his right hip flexor and watched the session from the sidelines as he waited to begin his journey home but seemed in relatively good spirits despite the setback. He said was in some pain when climbing stairs but that, in general, the niggle is “not too bad,” and that “these things happen.”

By the time South Africa’s net session had ended and they headed to the Lord’s outfield for their fielding session, it was time for Olivier to head to the airport. He will be back in South Africa tomorrow, where “I’ve heard it’s really cold,” – a far cry from the UK heatwave that has left even those who are usually used to the heat sweating.

Close to the boundary near the Pavilion, Rabada wiped his brow as he prepared to practice his catches in the deep. He was grouped with Ngidi, Maharaj, Lutho Sipamla and Khaya Zondo. Of those, only Rabada and Maharaj have played at the venue before. Zondo, new to the slope, said he found the ball dropped on him quicker than he was expecting it to and Rabada and Maharaj instructed him to hold his hands higher up. “It’s like catching at the Wanderers,” Rabada told him. Zondo took all his catches after that.

About 20 minutes later, South Africa’s first session at Lord’s – their 10th stop on a tour that started five weeks ago – ended with high-fives and happy chatter. They have consistently maintained they are a happy, settled and confident group – despite the storms that raged for most of the last three years in South African cricket – and for the first time since the Covid-19 pandemic restricted access to training sessions, we could see it.

Asked what the mood in the camp was like on this tour compared to what it has been over the last while, Ngidi confirmed there was a lightness to the way they operated now. “I would say we are in a much better position now. You can see the team environment from the banter that we have and the energy around, everyone seems to be in a pretty good space,” he said. “We need to keep that environment. Once you’re happy off the field, it makes that job on the field easier.”

Because the job is about as tough as it gets. Although South Africa lead the World Test Championship points table, their toughest assignments in this cycle are still to come. They play Bazball-inspired England before their first festive-season visit to Australia, which include Tests at the MCG and SCG, since 2008. Most of the current squad have never experienced Test cricket in either of these places and South Africa are getting all hands on deck to ensure they are equipped.

Neil McKenzie, CSA’s high-performance batting lead, who works across domestic and international structures and has vast experience in England, is on this trip along with the team’s batting coach Justin Sammons. Malibongwe Maketa, the assistant coach in the Ottis Gibson era and current A team coach, is also around, as are regular bowling coach Charl Langeveldt, fielding coach Justin Ontong and head coach Mark Boucher.

Collectively, they like to use the word “upskill,” to describe what they have focused on as they’ve tried to rebuild South African cricket from the failures of the 2019 World Cup and subsequent tour to India that left the team in tatters. Things have not been easy since then, largely because of administrative crises but also because of the scrutiny the team environment has been under.

Ngidi, unintentionally, was the catalyst for that when he answered a question after winning the T20 cricketer of the year prize at CSA’s awards in July 2020. CSA’s annual awards take place again tonight, with the Test team far from home and the past season only a memory. This time it should be about no more than the cricket. And some time around the team confirms that they are finally able to focus on that alone. 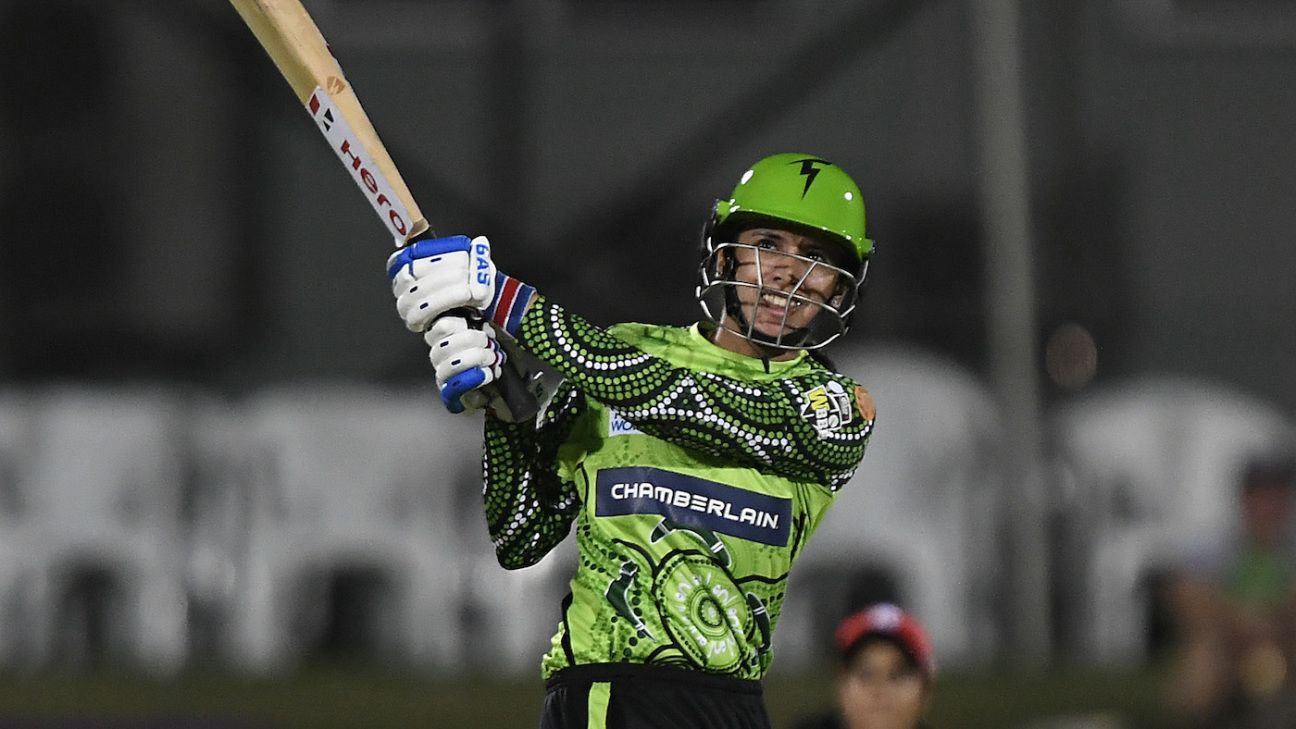 Smriti Mandhana: ‘I’ll be thinking about pulling out of WBBL’ – ESPNcricinfo 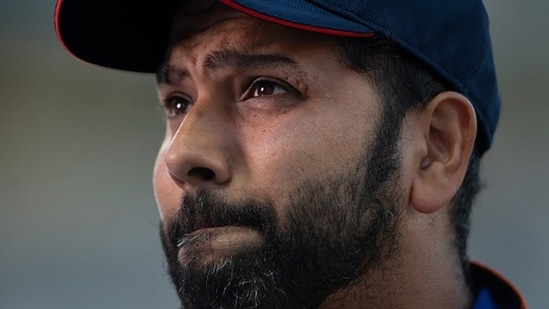 ‘Rohit backed him even after 4 failures, and…’: Ex-MI star on India captain – Hindustan Times