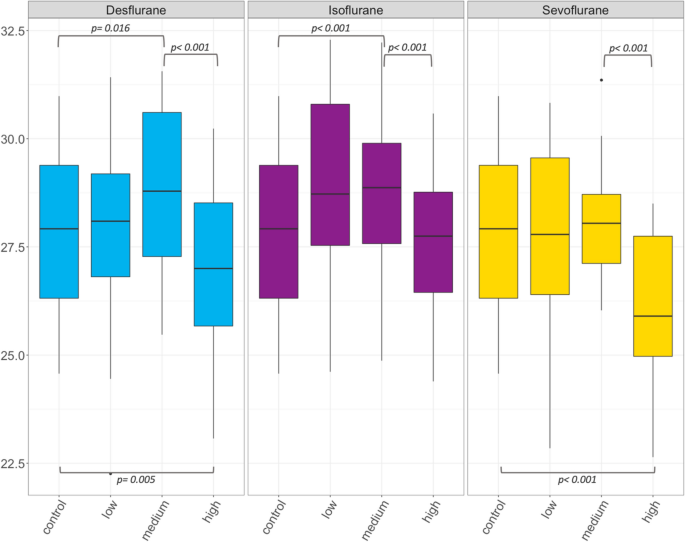 These findings are partially in line with the results of Kambam et al.11,12, who showed an ODC shift to the right for isoflurane and nitrous oxide. Furthermore, in their studies, no influence of sevoflurane on Hb-O2 affinity was detected. Noteworthy, the applied concentrations approximately corresponded to our low to medium concentrations where also no effects on Hb-O2 affinity was shown13. In contrast to our findings, Wade et al. reported that isoflurane at a concentration of 2%, corresponding to a MAC between 1 and 2, increased the oxygen affinity of sickle hemoglobin, shifting the ODC to the left17. Of course, sickle cell hemoglobin per se exhibits decreased oxygen affinity potentially explaining discrepancies when comparing results to healthy adults.

The underlying mechanisms leading to the reported modification of Hb-O2 affinity by inhaled anesthetics are unclear. An interaction with several receptors, modifying the electrolyte balance and, as a consequence, intracellular pH in red blood cells seems possible: Altikat et al. showed that the activity of glucose-6-phosphate dehydrogenase (G6PD) in red blood cells was inhibited by sevoflurane and isoflurane, but not by halothane. Thus, the production of NAPDH was reduced, hence exposing the red blood cell to reactive oxygen species18. Fomitcheva et al. showed that isoflurane in clinically relevant concentrations inhibits the activity of plasma membrane Ca2+-transporting adenosine triphosphatase (PMCA), thus increasing intracellular Ca2+ concentrations19. This increase was linked to a right shift of the ODC and a lower affinity for oxygen. As a potential cause, red blood cell shrinkage, resulting in an increase in 2,3-DPG levels was ruled out as the right shift of the ODC was also observed in red blood cells where shrinkage was prevented. It was hypothesized that the effects are based on an intracellular pH change due to interactions of increased free Ca2+-concentrations with the protonation of hemoglobin20,21. Further increasing the concentration to a MAC of approximately 3 was also shown to inhibit several types of ATPase like the Na+-K+-ATPase or the Mg2+-ATPase19. This may partially explain the underlying mechanisms behind the opponent effects on Hb-O2 affinity when progressing the dose to rather high concentrations, as observed in our study. Moreover, possible genetic influences on drug effects at an individual level, in terms of pharmacogenetics, must be taken into account22,23.

Although the demonstrated shift in p50 might seem minor, clinical relevance cannot be excluded and needs to be further evaluated. Whether a shift of the ODC to the right or to the left may be beneficial is still under debate and certainly depends on the individual patient and his underlying disease24. Changes in pulmonary O2 absorption capacity may be counteracted by numerous factors at the peripheral tissue level. A left shift might be capable to increase the oxygen absorption in the lungs, but at the same time it may reduce oxygen delivery at the peripheral cellular level. On the other side, Woodson et al. showed that in rats, a left shifted ODC can raise the coronary and brain blood flow without increasing the workload of the heart—similar to anemia25. However, at the tissue level hypercapnia, acid metabolites, and even local hyperthermia might easily mitigate these effects. A right shift of the ODC on the other hand, can increase the amount of O2 released in the tissues, although a reduced absorption of oxygen in the lungs must be considered. In patients suffering from an oxygenation limitation, for example COVID-19 pneumonia or ARDS, a left shift of the ODC might be beneficial in improving the O2 uptake in the lungs26. On the other hand, in heart failure, peripheral vascular disease and other conditions where tissue oxygenation is at risk, a right shift of the ODC might mitigate tissue hypoxia.

An anesthetist must consider several parameters when choosing the optimal anesthetic for the given patient. Cardiovascular risk profile, obstructive pulmonary disease, type of surgery and required depth of anesthesia, just to name a few. Currently, inhaled anesthetics are standard care in general anesthesia7. Despite many common properties, each inhaled anesthetic has its own characteristics: desflurane seems to maintain cardiopulmonary function at best, sevoflurane outperforms in terms of adverse effects like airway irritation, and isoflurane shows a high blood-gas partition coefficient, thus minimalized consumption and faster induction and awakening time4,8.

Due to the in vitro design of our study, further studies are certainly necessary to confirm our result by investigating the impact of all three inhaled anesthetics in vivo. In addition, underlying pathophysiological mechanisms require further investigation.

ARK: Direwolf – How to Tame, Feed and Breed! – Guided.news EN