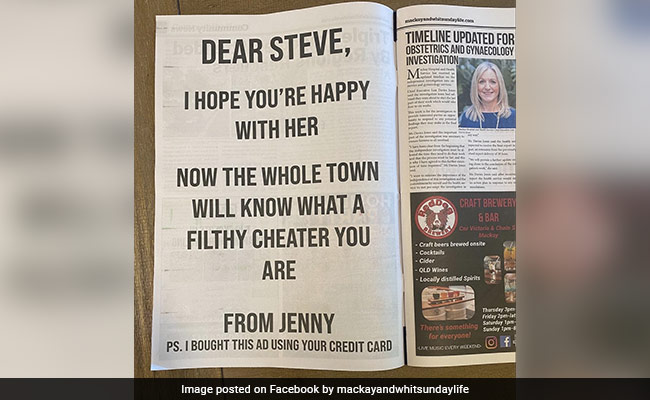 The full-page advert seemed to have made the morning of many who were left rolling on the floor.

An unusual advertisement in an Australian newspaper has grabbed eyeballs. This is because a disgruntled woman decided to shame his “cheater” partner through a full-page advert. The photo of the advertisement has now gone viral, cracking up people on the Internet.

The picture was shared by the weekly newspaper, Mackay and Whitsunday Life, on Facebook after it was bombarded with queries about the advert. “Dear Steve, I hope you are happy with her. Now, the whole town will know what a filthy cheater you are.  From Jenny,” the advertisement read.

Well, her revenge was not limited to this. As per the picture, the woman revealed, in the end, that she paid for the advert using her partner’s credit card. “PS. I bought this ad using your credit card,” it read.

As the newspaper was circulated, it sparked the curiosity of the readers who soon reached out to the publication seeking details on the advert. The newspaper, in the Facebook post, shared that it was “inundated” with messages about the advert and decided to address it.

“We have been inundated with dozens of messages this morning about the Advert on Page 4 of Mackay Life – As there’s too many to reply to; we would like to address it here,” the publication wrote.

Clarifying the queries, the newspaper stressed that they do not know about the person, Steve, mentioned in the advert. “But apparently he’s been very very bad,” it added. The publication also made it clear that they would not be revealing any details about Jenny. Interestingly, the newspaper added that they have “not charged the credit card in question.”

The full-page advert seemed to have made the morning of many who were left rolling on the floor, except Steve.

Users soon flocked to the comment section with their amusing reactions. “Good on you, Jenny. Hope karma bites him big time,” wrote one user.

Another said, “Good on you, Jenny.”

“Well done mate,” read one of the comments. 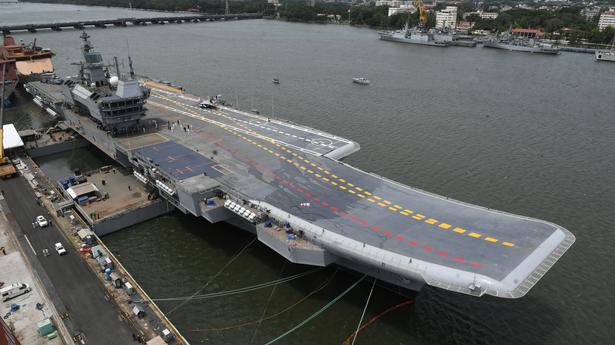 The naval prowess of the Cholas – The Hindu